In recent months, we have been working on research on the education system in Canada. Universities and colleges in Canada have reached a very high standard. They offer enormous opportunities to the world of research without neglecting the skills required by companies.

Soon we will be ready again to travel to Canada for research and study for a language course or a summer school. For this reason, we are pleased to present the first part of our paper about the world of Canadian universities, where students are considered a resource to be nourished and to conquer.

In the uncertainty of the scenarios for the autumn courses, the certainty is that Coronavirus will not stop innovation and the growth of talent, international exchanges in the world of research and relations between Italy and Canada. Enjoy the reading!

Study and research in Canada 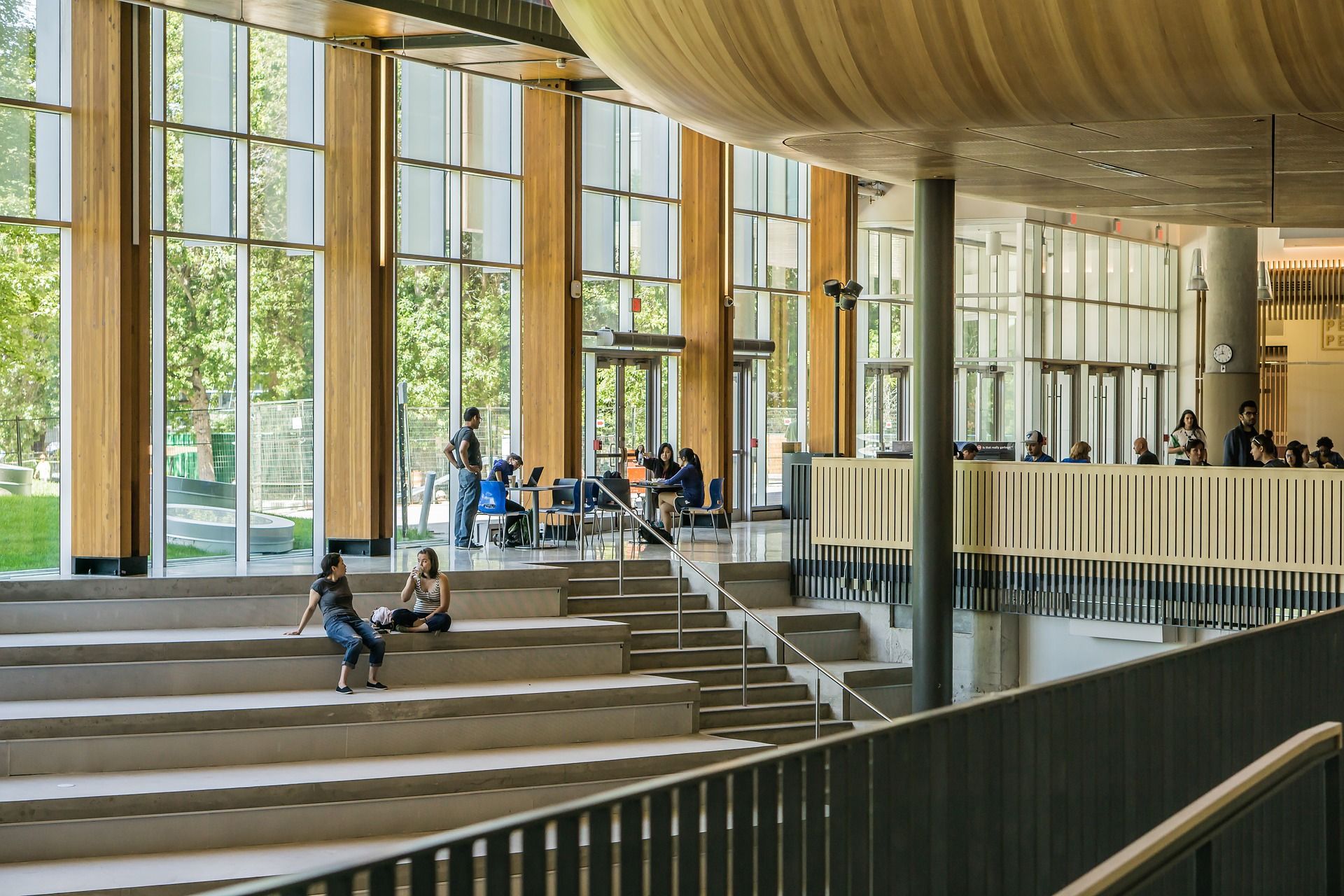 More than 2 million people are currently attending universities, colleges or other post-secondary education pathways in Canada. They are Canadians and students from all over the world. If we wanted to make a comparison, the student population engaged in studies in Canada after graduation, could be represented with the population of the entire Province of Turin.

It's not just a question of quantity. There is no shortage of high quality indicators of the entire system and they contribute to the attractiveness that Canada has towards international talents who move for work reasons (we have already seen it in the focus on migration dynamics) but also for study reasons.

Among the reasons for going to study in Canada we find: 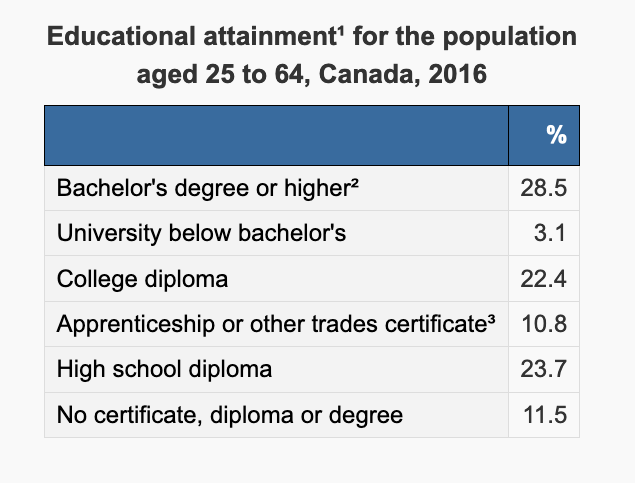 How do you become good at attracting talent from the world? It is the general level of education in Canada that is high in itself and shines internationally. The OECD indicators collected in the "Education at a Glance" report in the chapter on Canada outline a first photograph.

Education in Canada at a Glance

Universities and Colleges: how post secundary education works in Canada

We will go into a subsequent article in further analysis on international students in Canada and the funding received from universities.

Let's now see how "university" education is organized in Canada, since it presents some substantial differences compared to the Italian system, so much so that the use of the term "university" can be improper or at least limiting.

After obtaining a high school diploma (secondary education), the choices for students are in fact wider than the Italian student and provide for entry into various types of institutions, among which we will consider the main ones, namely:

There are around 100 universities and around 130 colleges in Canada. They are public institutions of higher quality than private individuals. However, public doesn't mean free. Enrollment fees in Canada are much higher than in Italian public universities, although much lower than in the United States, and we will see later on how the composition of public / private direct funding to universities has changed over time.

Canadian universities have a training offer very similar to the Italian system and consists of:

Most professional programs, such as medicine, dentistry, law, are technically undergraduate programs, but are usually considered to be second-level university programs, which must therefore only be started after the first degree program has ended.

The level of Canadian universities is considered among the highest internationally. Canada hosts 10 of the 250 best universities in the world according to the QS World University Rankings: 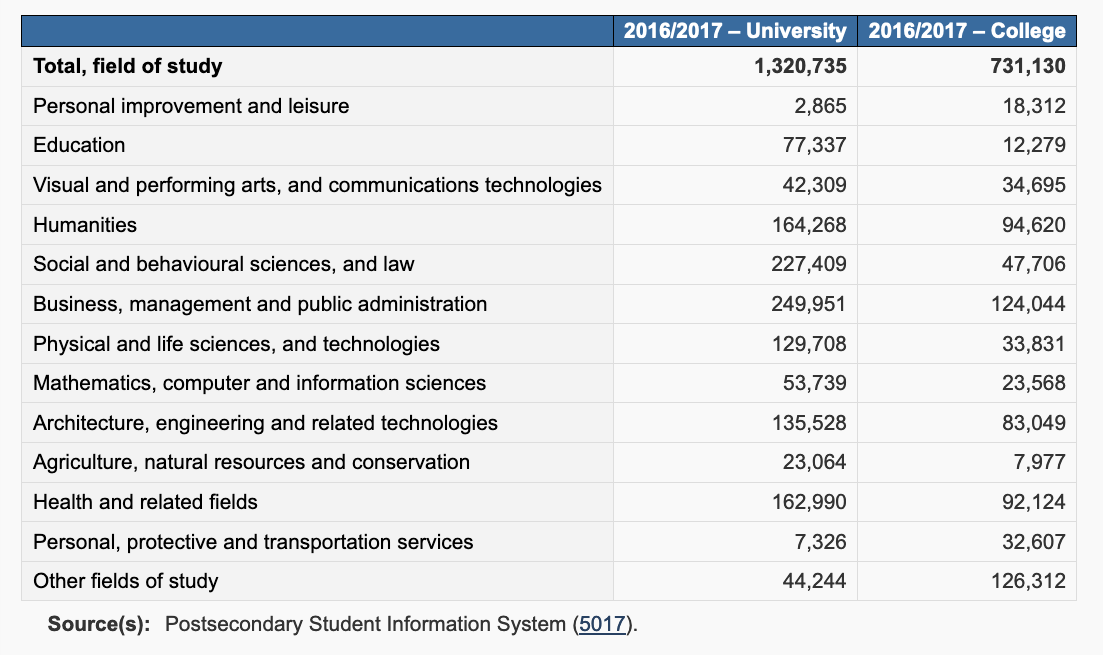 Statistics Canada. Enrolments in Canadian universities and colleges, by field of study, 2016/2017

Colleges: what are they?

The real difference with the Italian system is the presence of a post-secondary level of education that is more practical and closer to the world of work. We talk about the heterogeneous educational offer of the Colleges (also called Institutes of Technology, Community colleges, Polytechnics, University colleges, Colleges of applied arts and technology, etc.), where students acquire more profession-oriented skills, therefore immediately usable in working contexts

Like universities, colleges offer different level courses, which can also be combined with university courses (pathways, for example 2 + 2, or 2 years of university followed by 2 years of college):

Depending on the program chosen, the College will issue a certificate, diploma or post-graduate diploma.

If you opt for a college, the training range in Canada exceeds the 10,000 different programs available in 127 colleges, institutes and polytechnics, with technical and professional study options. Among the main ones:

Map of colleges and universities in Canada

Education in the Province of Québec 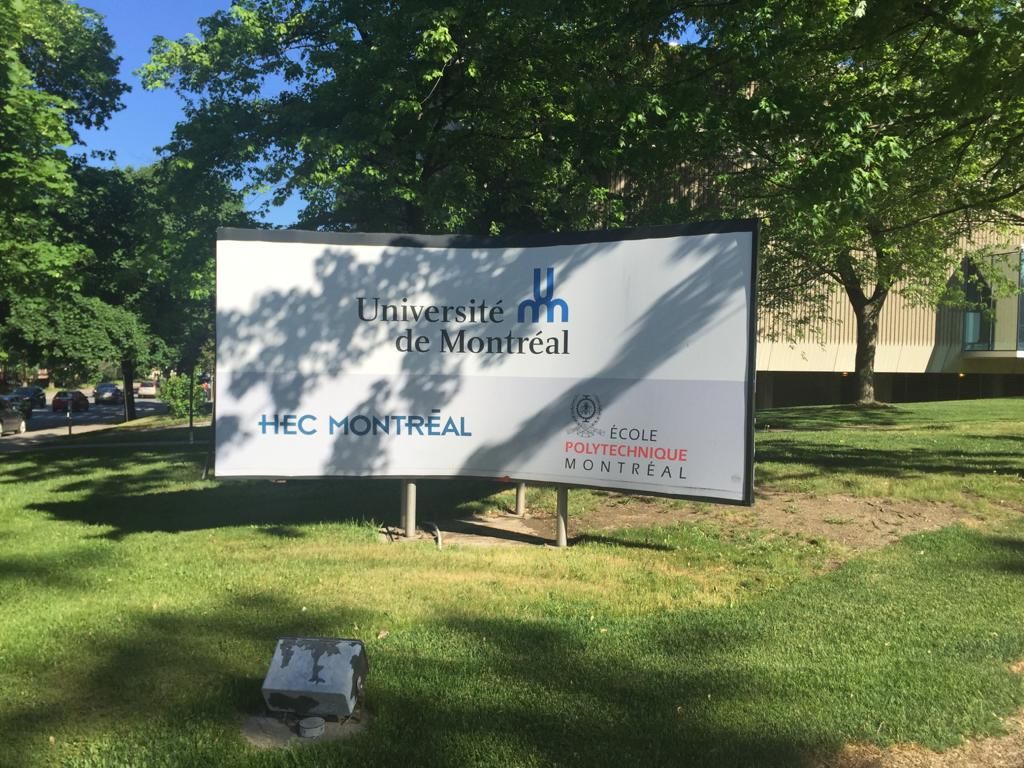 In Québec, the offer is completed with CÉGEP courses, the institution that prepares students for both entry to university and the world of work. An acronym for the French term Collège denseensement general et professionnel, it is a public school which provides the first level of post-secondary education. In fact, in the province of Québec, unlike in the other provinces, post-secondary education is organized in 4 levels. This level, therefore, is a sort of bridge between primary and secondary schools and the university level.

The education offered by CÉGEP and Colleges in Quèbec is divided into:

Do research and development activities in Canada

The spearhead of the Canadian education system is the research sector. Canada represents only 0.5% of the world's population, however Canadian researchers publish over 3% of the world's scientific papers.

Higher education institutions, in competition / exchange / collaboration with the business world, are the integral part of the Canadian research system.

Universities and businesses are also the largest direct R&D funders in their respective performance sectors. The commercial business sector has funded $ 14.1 billion of its $ 18.7 billion in research and development projects, while the education sector has a share of $ 7.1 billion in direct financing of its $ 14.3. billions of research and development projects.

The operational funds available for post-secondary education are provincial in nature, but the federal government contributes through transfers to the provinces, support for scientific research and various forms of financial assistance to students.

They are also known as "Tri-Council" agencies to which the Canada Foundation for Innovation (CFI) has joined since 2018.

Vanier Canada Graduate Scholarships and Banting Postdoctoral Scholarships are among the most prestigious funding programs for researchers.

Obviously, public funding follows the rule of competitiveness. The best researchers therefore tend to gather in the best universities which consequently continue to receive even more funding.

The country's top three institutions (Toronto, UBC and McGill) receive around 30% of all funding of the "Tri-Council" agencies. 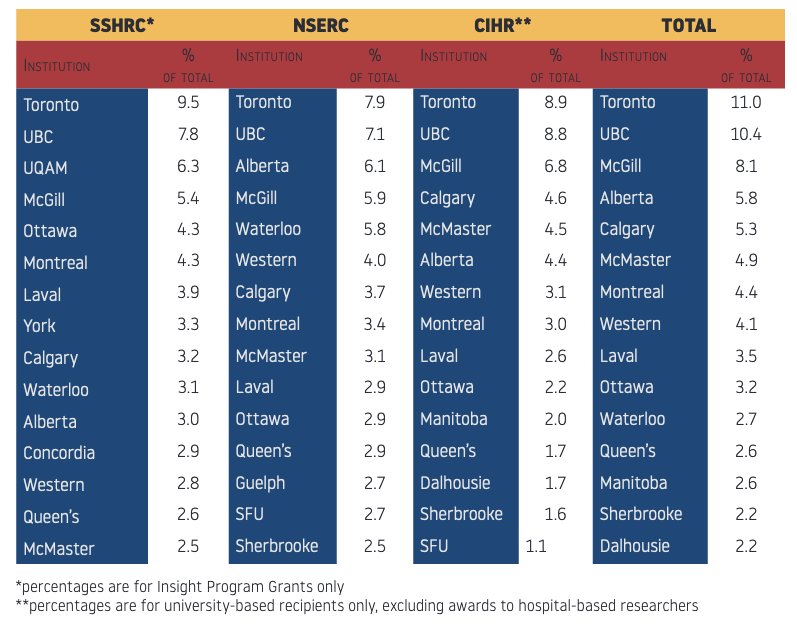 Source: The State of Postsecondary Education in CANADA 2019

The four institutions disburse approximately $ 2.3 billion annually in funding to Canadian post-secondary institutions, and nearly 99% of this funding goes to universities. This level of spending surged in the first half of the 2000s, and then remained constant since 2005. Since then, the share of investments by the university institutions and the involvement of individuals and businesses has grown since then.

Among other federal funding sources for universities and colleges, the Canada Research Chairs program, Il invests up to $ 295 million a year to fuel research in engineering and natural sciences, health sciences, humanities and social sciences.

Specific funds have been dedicated to practically every sector, such as the il Canadian Institutes of Health Research (CIHR) which invests about 1 billion dollars every year to support health research, not to mention the infrastructure investments that inject millions of dollars in the sector. with one-off but decisive interventions for the renewal and expansion of universities.

In the next stage of our journey into the Canadian post-secondary education system, we will talk about the thousands of international students who choose Canada for their studies every year and we will try to understand more in depth what type of financial model is at the basis of system.

Don't want to miss the updates of the Centro Studi Italia Canada?