The technology giants are increasingly attracted to the technological development and the dynamic and innovative ecosystem of Canada: the fourth Facebook hub in the world will be in Montreal and Google plans a smart city in Toronto

"It's no longer surprising that technology giants choose Canada as their home away from home." On the occasion of the official announcement of the opening, by Facebook, of an Artificial Intelligence research laboratory in Montréal and the commitment of the big social media to invest, here, 7 million dollars in the sector, the words of the first Canadian minister Justin Trudeau, sounded like an explicit request from Canada to be officially admitted into the club of major technology innovators.

The FAIR Montréal laboratory will, in fact, be one of the four Facebook hubs in the world, - the others are based in New York, Paris and Menlo Park, in California - an international recognition, by an excellence of the economy, of extraordinary development of the Canadian ICT sector, in particular in Québec, thanks to a mix of technological innovation, attraction of investments, training and research. This is also confirmed by Yann LeCun, Chief AI Scientist of Facebook, according to which, to attract Facebook, it was precisely the economic ecosystem in the AI field that Montréal was able to achieve, the effects of which have repercussions on the entire economy.

The management of the laboratory, which wants to attract and retain the most brilliant talents of AI, has been entrusted to Joelle Pineau, professor in the computer science department of McGill University and co-director of the Reasoning and Learning Lab. In the initial phase 10 researchers will be employed, but the goal is to reach 30 within a year. The new hub will collaborate with McGill University and the University of Montréal, to support communication between industry and academia community, through open research and open source science, working on all aspects of AI research, with a focus on reinforcement learning and framework for sequential decision-making, deep learning, optimization, computer vision and video undestanding.

The push for innovation in Canada has not gone unnoticed even to Google, which is working to transform Toronto into a smart city of the future, thanks to the birth of a new district, built according to the most innovative technologies. Sidewalk Labs, the division of innovation in the field of urban planning of Alphabet, a company that belongs to the giant Silicon Valley, has indeed responded to the announcement launched by Waterfront Toronto, the Canadian administration established in 2001, by the common effort of the governments of the Canada and Ontario and the city of Toronto in order to redevelop the city area that overlooks Lake Ontario.

The call for proposal 'Innovation and Funding Partner for the Quayside Development Opportunity' was launched in March 2017 and identified in Sidewalk Labs the perfect partner to realize the ambitious plan: the creation of a new neighborhood, Quayside, located in Parliament Slip, just south-east of the center of Toronto: a new sustainable district, accessible to all and which, thanks to the express technological innovation, facilitates mobility and the degree of social inclusion of citizens. It will be “a neighborhood that puts people first", said Justin Trudeau, “I have no doubt that Quayside will become a model for cities around the world and will make our communities the best places to call home”.

Google has committed 50 million dollars for the planning phase of the pilot and testing project, a first step, which the city considers important, also for the opportunity to scale the level of technological innovation, brought to the city by Google, to the entire city and in particular to the 800 hectares of land on the lakefront, which Waterfront Toronto wants to transform into a sustainable and dynamic space.

In fact, Quayside will represent a hub of avant-garde urban innovation for the quality of city life and road safety, innovation in the field of energy, construction techniques and public mobility; exploit the already advanced technology sector of Toronto and develop innovations that could benefit communities and neighborhoods in other parts of the city. 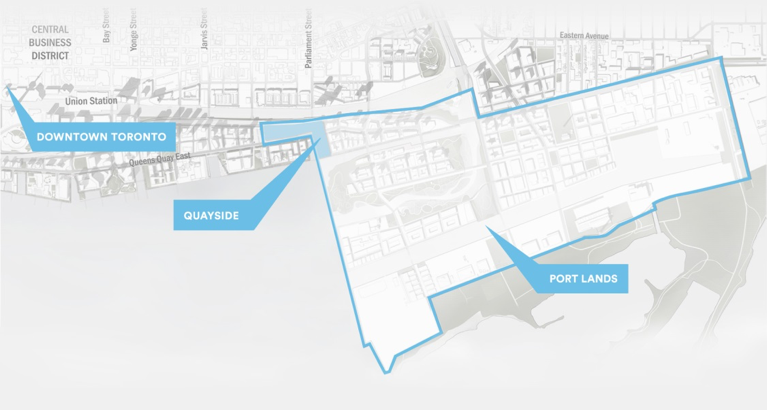 And the Canadian headquarters of Google will also be built on the eastern waterfont, a concrete sign that the big G really believes in the transformation of Toronto into an example of an international smart city.

On the occasion of the presentation of the project, Dan Doctoroff, CEO of Sidewalk Labs and former mayor of New York City, launched a real manifesto of the technological city, the solution for the “challenges related to growth, from the increase in life that weakens the middle class, the increasingly long and congested movements, the challenges of climate change”.

He then underlined how, after a worldwide research to identify the most suitable place to make real solutions to these enormous challenges, “we found it on the lakefront of Toronto, in line  with a perfect public partner, Waterfront Toronto. This will not be the place where we will use technology as an end in itself, but rather the one in which we will use the latest digital tools and innovations in urban design to inspire cities all over the world”.

The ambitious program of the third edition of the Canada-Italy Forum on Artificial Intelligence 2021 that has just ended leaves behind an ideal climate ...

Artificial Intelligence has become part of our work spaces, of our homes, and governs means of transport and production processes. Are algorithms good ...