The maple leaf is among the most iconic symbols of Canadian culture, which is also represented on the flag. The tradition of maple syrup, then goes back to the First Nations and today over 70% of world production is located in Canada, particularly in the Province of Quebec.

MapleFarm, one of the main importers and distributors in Italy and in Europe, told to the Centro Studi Italia Canada of beneficial properties, characteristics and production methods of the most popular and delicious product made in Canada.

Every spring, the long-awaited maple syrup season begins in Canada. In fact, 71% of world maple syrup production takes place in Canada, particularly in the Québec region.

Maple syrup is an integral part of Canadian culture. They were the aborigines to teach the first European settlers how to collect the sap from the trees and boiling it to obtain syrup. Maple syrup was the first type of sweetener produced in the eastern part of North America and remained the most widespread until 1875, when the importation of sugar cane began.

Today the Canadian maple syrup is exported to 45 countries around the world, in the traditional forms of syrup and sugar, but also maple butter, maple candy and a whole series of products that contain it, such as oatmeal , yogurts and many others.

The main opportunities are favored by CETA

The provisional application of the Comprehensive Economic and Trade Agreement (CETA) between the European Union and Canada, which entered into force in September 2017, offers a great opportunity for maple syrup exporters from Canada. Almost 94% of agricultural products are now exempt from duties, including maple-based products. Before the agreement, the maple syrup and sugar were subject to tariffs of up to 8%.

In Quebec there are about 11,000 producers of maple syrup extracted from over
46,000,000 trees. 92% of exports of Canadian maple products are produced in the area.

Most of the exports are destined for 65% towards the United States, followed by 11% in Germany and 7% in Japan. This is followed by other European countries such as the United Kingdom, France and Italy. *

At one time the sap was collected in buckets and then poured into a large container, pulled by horses or by a tractor, until it reaches the evaporation plant.

At the beginning of the 70s this sector had a strong impulse with the invention of new collection and production systems.

Today the manufacturers use a pipeline system, reverse osmosis and high-efficiency evaporators, which has made this industry much more efficient. No coincidence that Canada can boast of having adopted the most innovative systems in the world for the production of maple syrup.

The safety and quality of Canadian maple syrup are monitored by the Canadian Food Inspection Agency (CFIA), which ensures that producers comply with strict federal standards. The CFIA is also responsible for the classification of the product in its category. 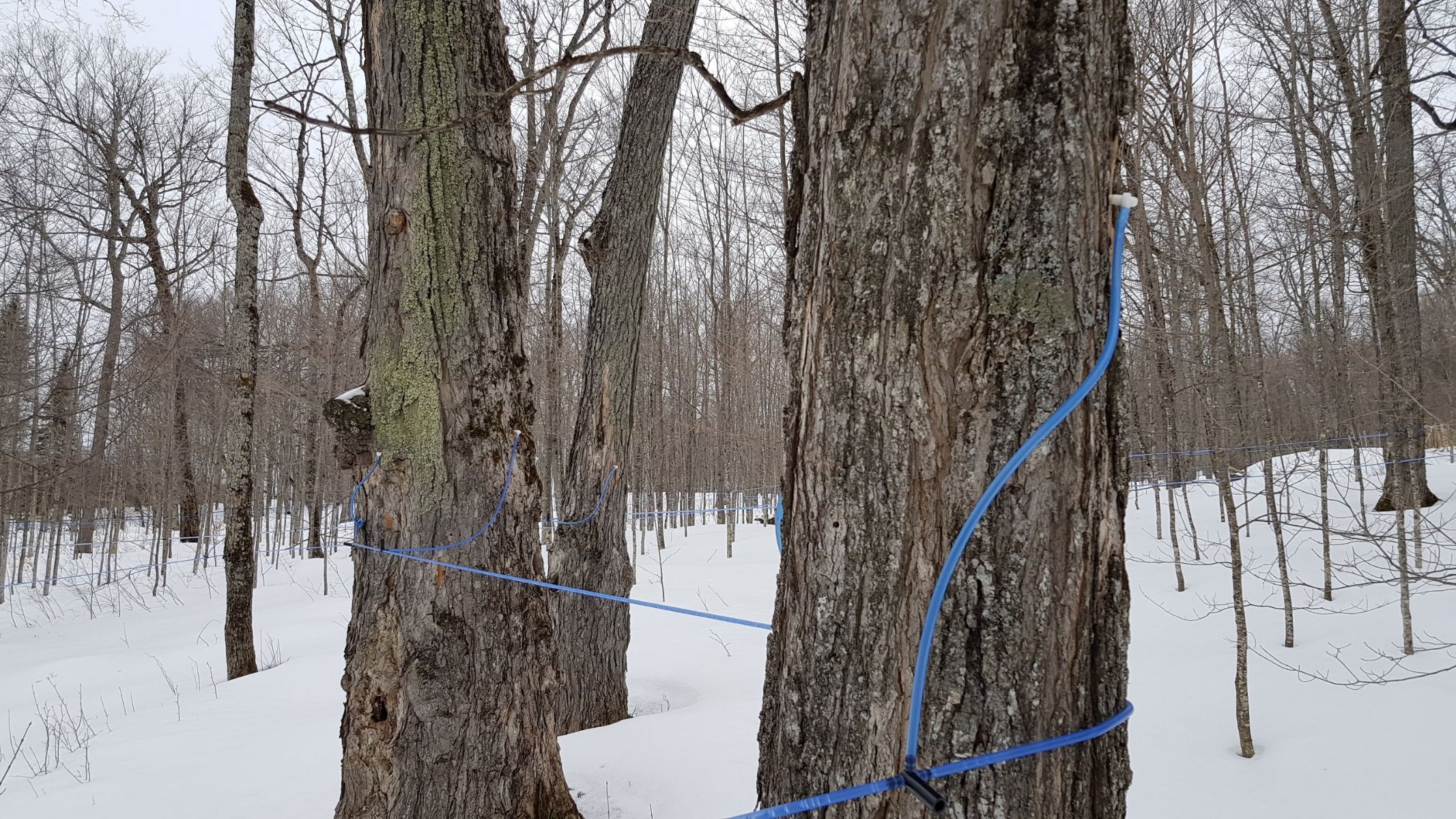 The syrup is classified according to the strict Canadian regulation which defines two grades (Grade A and Processing Grade) and four color classes (Gold, Amber, Dark and Very dark).

The 4 classes of maple syrup

It is nature itself that characterizes the nuances of maple syrup. At the beginning of the harvest season, the syrup is generally clear with a slight sweetness. As the season progresses, the syrup takes on a darker color with different aromatic connotations. In fact, this wonderful natural sweetener offers a variety of different aromatic components, including flavors and aromas of hazelnut, vanilla, coffee, floral and spicy.

Each color class is characterized by a denomination, accompanied by a note on taste:

The main maple syrup supplier in Italy is MapleFarm.

MapleFarm maple syrup comes directly from the heart of the Canadian forests of Québec, particularly famous for offering this nectar an intense aroma and a distinctive flavor.

100% pure, MapleFarm maple syrup, produced according to the original Canadian tradition, is free of colorings, preservatives and added sugars and is subject to the strictest quality controls both in Italy and Canada to offer the highest quality.

MapleFarm is the only supplier in Italy to offer the complete range of the 4 categories of Grade A maple syrup, also with organic certification.

Imports of maple syrup, in Italy and in Europe, are managed monthly to ensure maximum freshness in each bottle.

Where to buy maple syrup

A small premise is necessary. The Canadian maple syrup par excellence is pure: 100% natural, with no dyes, no added sugars or thinners. It is not to be confused with its surrogates who are often called “pancake syrup”. It is therefore important to know how to read the label: the real maple syrup on the label shows one and only one ingredient, or the “maple syrup”.

That said, the sweet Canadian nectar can be purchased online or in the best shops and supermarkets.

Respect for nature and sustainability

The production of maple syrup is completely natural. As the maple grows, it accumulates starches, which it converts to sugar during the spring thaw and mixes with the water it absorbs through the roots. The sap of the tree is composed of 97% water, as well as minerals, organic acids and substances that give it its characteristic flavour. For this reason, 40 liters of sap are needed to get just one liter of maple syrup.

Canadian maple syrup producers pay maximum attention to the health of their maple forests. From each tree they take only the sap necessary to obtain 1.5 liters of syrup, which is equivalent to less than a tenth of the entire sugar content of the plant, this to avoid removing the necessary nourishment from the tree. Therefore no one better than the Canadian maple syrup producers takes the health and well-being of these plants into greater consideration.

It is good for the body because Maple syrup

The nutritional values of the maple syrup do not vary according to the grade but may undergo some fluctuations depending on the season and the harvest period.

For more information and details: www.maplefarm.it