The funding model of Canadian universities

We continue our investigation of the post-secondary education system in Canada.

This time the focus will be on international students: where do they come from, what courses do they choose and how much does it cost to study in Canada?

Furthermore we'll see which public/private financial model is the basis of Canadian universities. Or who pays the post-secondary education bills in Canada?

In the first part of the canadian education system analysis, we highlighted the strengths of Canadian universities and colleges. We may ask now:

Who finances the quality and innovation of the Canadian post-secondary education system?

Canadian universities and colleges have three main sources of income:

The economic dimension of the sector is not negligible.

Post-secondary public education in Canada is an industry of around $ 60 billion, with $ 30 billion in revenues per year.
(Source: Statistics Canada. Financial information of universities and degree-granting colleges, 2017/2018)

Starting from the two year period 2004-05, direct public funding to universities begins to decline or otherwise become stagnant. While the income from university fees is growing with a considerable contribution given by international students.

This does not mean that the Canadian system is poorly funded publicly.

A change in the relationship between public and private resources, however, also generates a change at the level of the expressed model of governance, the evolution of which will be interesting to follow.

Compared to the European public model, Canada is taking on a more "English-speaking" model, in which private resources are a substantial part of the university budget (which however remains public unlike in the American model), including university fees, and in which public subsidies are mainly used to balance the system.

In the international comparison, in any case, resources are not lacking. The Canadian higher education system is among the most funded in the world.

In 2014, public and private expenses for the total of institutions providing tertiary education amounted to 2.5% of the Gross Domestic Product. The OECD average is 1.5%.

Most of the public funding comes from the provinces ($ 10.8 billion) which mainly cover operating costs.

The vast majority of federal government funding (88.4%) is earmarked for sponsored research through the research funding programs that we mentioned in the previous focus Study and research in Canada.

Among the self-generated revenues, in particular, colleges can count on revenues deriving from applied research financed by local industries. In addition, both Canadian colleges and universities are active in the export of products and educational services and specialized training, in Canada and abroad, to support various production sectors, such as mining.

We come now to one of the most consistent items of the university budget: student fees.

From tuition, $ 8.4 billion came to universities, with a rapidly growing percentage of college tuition revenue.

The increase in this percentage is due to two factors:

From 2012/2013 to 2016/2017, the last academic year for which data are available, the number of international university students increased by 30.9%, compared to a slight decline of 0.4% for Canadian students.

The average annual disbursement of international students at universities and colleges was $ 25,549 in 2017/2018, almost four times what Canadian students paid annually or $ 6,618. 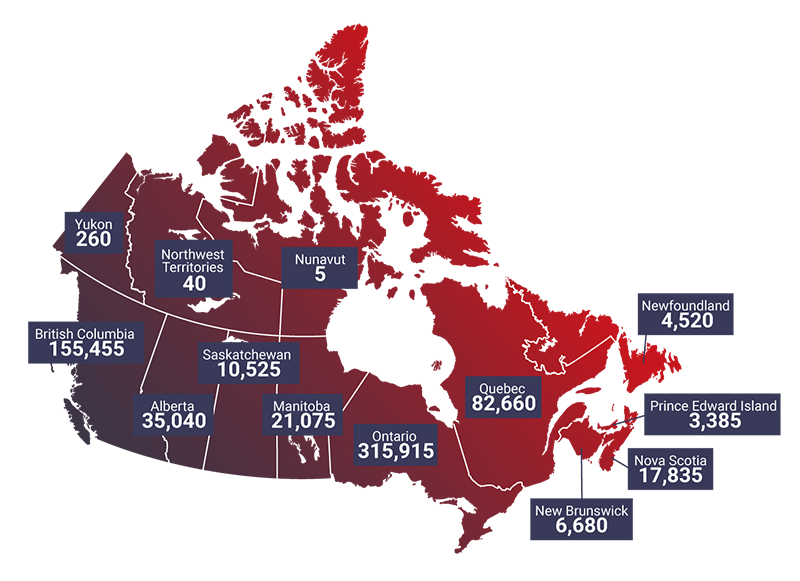 Distribution of international students in Canada
(Source Government of Canada)

International students are therefore a part that is worth 13% of all tertiary education students in Canada, compared to 6% in OECD countries. According to Canadian data as of 2014, internationals represented 29% of students in Canada at the doctoral level, 9% at the graduate level and 17% at the master level.

Why can the flow of incoming money from international students' tuition fees affect the model of post-secondary education?

Future policies will somehow have to find a balance between these funding components to continue to devote attention to attracting international profiles, without taking away from the training needs of local communities.

The strategy launched by the Canadian government, "International Education Strategy (2019-2024)", has specific objectives for international students.

First, the aim of the next few years is to continue to attract international talent, trying to diversify its origin, currently highly polarized in China and India from which 50% of foreign students come to Canada.

It is a geographical dynamic that we have already observed in the survey on migratory flows in Canada.

As for the flow from Italy, according to data provided by the Canadian Embassy in Italy, 3,095 Italian students studied in Canada in 2018.

This figure only captures students with a study visa, therefore with stays longer than 6 months. It therefore does not include those who go to Canada for an English course or a short course, or a semester of high school. In any case, they are small numbers when compared to the Asian student presence.

Canadian policies to attract more and more international students are explained by a multicultural society that sees talent, from whatever country it comes from, an element to conquer rather than reject, to build a multicultural and inclusive environment at all levels.

But, of course, it also responds to specific competitiveness strategies on the markets. Not only the international students, but the numbers also say, are a resource for the budget of universities and colleges.

They are also a part of Canada's commercial policies, as stated on the Government website:

As a trading nation, Canada must continually expand and diversify its list of potential exporters as well. (...) The new strategy contributes to these goals by increasing the diversity of the populations of incoming students, skill sets and programs and promoting interpersonal links and international networks.

In short, the actions planned by the Internation Education Strategy and aimed at international students are: 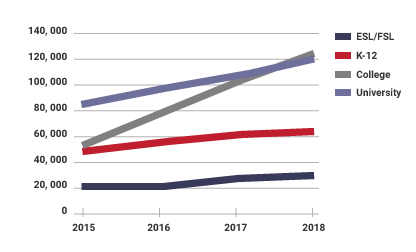 1. Extend the Student Direct Stream to other countries

In the next 5 years, $ 1 million in addition to $ 100 thousand in the current budget are allocated to speed up the processing times for study permits to foreign students who apply online and to develop simplified application processes also for other countries, similar to those that currently already exist for China and India.

and by year in which permit(s) became effective 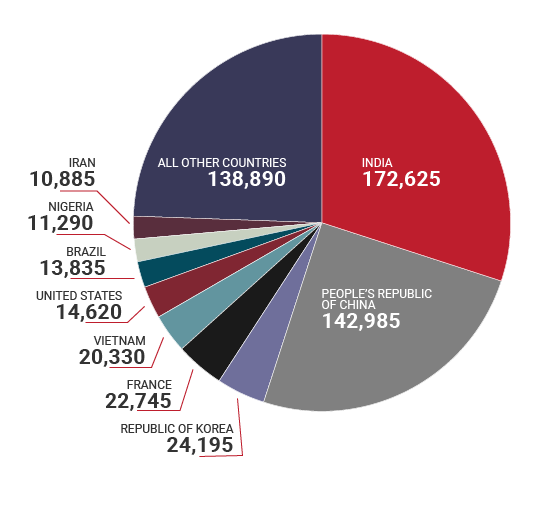 2. Modernize form and procedures for immigration

The online infrastructure chapter for visa applications is assigned about $ 18 million in 5 years, plus $ 1.2 million in spending to increase the quality of online applications and send more timely feedback.

$ 5 million in 5 years then go to the inclusion chapter, to increase scholarship funding and consolidate aid programs aimed at specific regions and countries, facilitating their knowledge in target markets.

Study permit holders with valid permit as of

What do international students study in Canada?

Statistics Canada data, even if referring to 2013-2014, gives us a vision of the fields most appreciated by those who travel to Canada for study purposes.

It is particular that the studies preferred by the internationals do not coincide with those most chosen by the Canadians.

27% of international students go to Canada to study Business, Management and Public Administration (preferred only by 17% of Canadian students), while 19% opt for Architecture, Engineering and Related Technologies (they affect only 9% of Canadians).

Other fields of study of interest to international students are Social and Behavioral Sciences and Law (15%), Physical and Life Sciences and Technologies (10%) Humanities (8%). 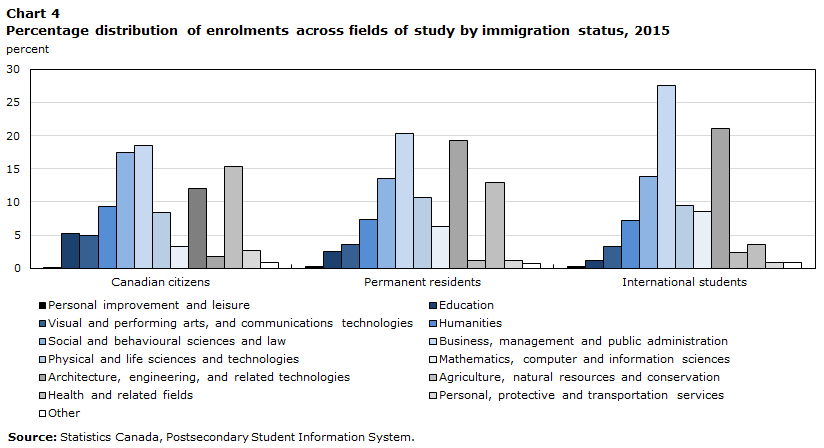 The most popular study program for international students at Bachelor level is the path in Business, Management and Public Administration (33%), while for both Master and Doctorate levels it is the Architecture, Engineering and Related Technologies sector (27% and 30%, respectively, with major students concentrated in engineering).

Working in Canada (after studies)

One of the most interesting aspects of studying in Canada is job opportunities that may arise. Job placement rates after graduation are high:

90% of graduates 3 years after graduation have entered the world of work and 83% of them are satisfied with what they are doing.

Studying in Canada is therefore one of the ways to enter the country and then reside there permanently, the rates of permanent residence after the studies are in fact very high.

Nearly 54,000 former students have become permanent residents in Canada in 2018, according to statements by Ahmed Hussen, Minister of Immigration, Refugees and Citizenship. 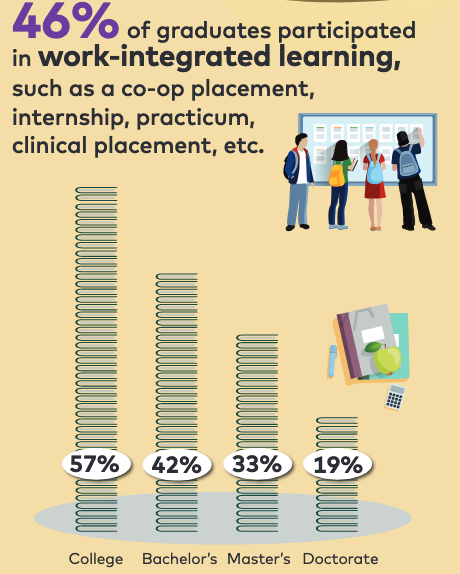 The advantage for international students, those enrolled in post-secondary courses at a un Designated Learning Istitution (DLI), is that they can already work while studying.

The International Student Program  in fact issues a study permit also valid for working inside or outside the campus for up to 20 hours per week during the school year and full-time during the holidays (40 hours per week) and breaks.

The proximity of the world of education to the world of work makes the transition from one to another certainly easier for the student in Canada.

46% of all graduates in Canada in 2015 participated in integrated learning programs with moments of participation in the world of work (Work Integrated Learning WIL) as part of their tertiary education, such as an internship.

The percentage reaches 57% for College students, who as we have seen are by their nature closer to the world of work.

There is also a post-graduate program, the Post-Graduate Work Permit Program aimed at students who, after finishing their studies, want to stay in Canda to acquire skills to spend on work.

authorized to work without first having a job offer.

This is certainly also helpful in obtaining the express entry, the permanent residence visa in Canada, which as we saw in the article dedicated to migratory flows in Canada, is a points program in which they score both the level of education and the work experience.

The education - training alternation in Canada

Internship experiences, tutoring or in any case connections between students and companies are highly encouraged by the Canadian government.

One example is the Student Work Placement Program, which offers post-secondary students across Canada a paid work experience related to their field of study.

The activities are integrated into the curriculum, providing for an alternation of study to paid work periods.

Direct student experiences may include, but are not limited to:

The operation is managed by the Employment and Social Development Canada ESDC which works with partners identified among associations and organizations recognized as representing the interests of employers in industries, businesses and post-secondary education institutions.

Thus partnerships with colleges, universities, polytechnics and CÈGEP are activated in order to create a connection between businesses and students.

Employers who offer student work placements receive wage subsidies of up to 50% of the wage cost faced (up to a maximum of $ 5,000 per placement).

In addition, a 70% wage subsidy (up to a maximum of $ 7,000 per placement) is available for first year students and underrepresented groups.

The Co-operative Education and Work-Integrated Learning  portal is available to learn about internship programs in Canada.

As Universities Canada, reports, four out of five employers surveyed say that students enrolled in programs such as "Co-Ops" with internships included in the chosen course of study, are a source of new talent and potential future employees.

Additionally, according to Statistics Canada, the percentage of full-time graduates hired is higher (86%) among those who completed a Co-Op program than other graduates (79%) and report finding a job more in line with the course of studies completed.

Having reached the end of our two-part investigation, it seems to us that Canada expresses a sort of synthesis between the hypercompetitive but certainly efficient US model and the European public model, which expresses levels of excellence in research but is in great difficulty financial.

Overall, the Canadian system is a model to be observed carefully.

We will see if such a strong dependence on the financial component from the university students' tuition fees will lead to a risk of political and resource carelessness towards the needs of the local students that at present are not met.

We shall then wait and see the effectiveness of the policies implemented to make the international student population, currently mainly Asian, more heterogeneous.

Without a doubt, the Canadian model highlights an essential node of the post-secondary education sector in the era of globalization:

it is not so much the number of brain drain the measure of a system that does not work, as the number of attracted talents is the quality of the system itself.

Don't want to miss the updates of the Centro Studi Italia Canada?